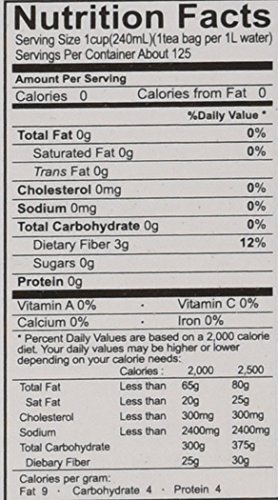 Chung Jung One 100% orgainic Roasted barley tea is a caffeine-free, roasted-grain-based tisane made from barley, which is healthy, naturally caffeine-free, sugar-free, and deliciously refreshing! You can enjoy the tea in either cold water or hot for your choice. Barley tea is popular in Korean, Japanese and Chinese cuisine. It is also used as a caffeine-free coffee substitute in American cuisine. Barley water is a popular traditional soft drink in Britain.Roasted barley tea is called Boricha in Korean or Mugicha in Japanese. While the tea is generally served year-round, hot in winter and cold in summer, in Korea. Originally, roasted barley seeds were stewed in hot water. The Korean often drink barley water with a meal to aid digestion. It is also known as an effective treatment against nausea. Many people believe that barley tea aids in cleansing the body of toxins. It is said to reduce stress and related conditions. Barley contains melatonin and tryptophan which works together to promote a regular, healthy sleeping pattern. Drink the tea prior to going to bed for a restful night’s sleep.
Is Discontinued By Manufacturer ‏ : ‎ No
Item model number ‏ : ‎ SYNCHKG051240
UPC ‏ : ‎ 773821704159
Manufacturer ‏ : ‎ Chung Jung Won
ASIN ‏ : ‎ B00JBF0K6O

Added to wishlistRemoved from wishlist 0
Add to compare
$17.00